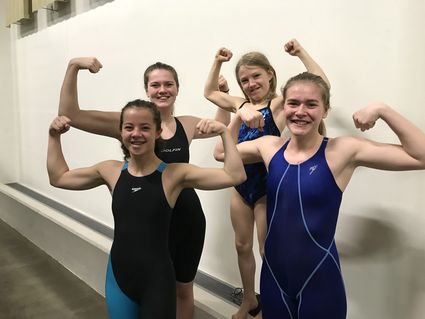 Viking Swim Club sent four girls to the Junior Olympics in Anchorage at the end of April. VSC was one of 24 clubs competing in this state wide event. The girls each had to have their own qualifying times and competed in 21 events total, making the finals in three events. In back from left to right Alyssa Guthrie and Abby Worhatch. Front left to right Brynn Lister and Allie Morgan.

The borough assembly received a proposed update to its zoning code that would introduce a new form of affordable housing, an expansion of the historical and industrial districts and the end of a requirement for businesses to include parking downtown.

The borough assembly held a work session to discuss a plan to impose restrictions on the senior tax exemption. A possible annual fee to sales tax exemption card holders was agreed upon ranging between $50 and $60.

Police Chief Kelly Swihart and his wife Melinda, the deputy borough clerk, announced their retirement at the end of the chie...