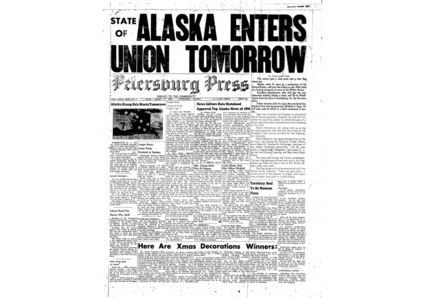 Alaska joined the Union as the 49th state 60 years ago this month. The front page of the Petersburg Press proclaimed the event in a bold block headline reading, "State of Alaska enters Union tomorrow," in its January 2, 1959 edition. Alaska was a possession of the United States for 91 years. William A. Egan assumed the governorship shortly after President Eisenhower signed the Statehood proclamation in Washington, D.C. on January 3.