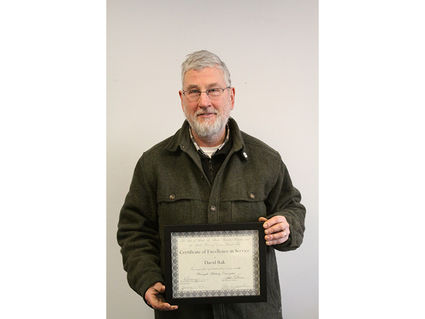 David Rak received the Excellence in Service Award from the Alaska Department of Fish and Game this year, for serving as secretary of Wrangell's advisory committee for over 20 years.

The Alaska Department of Fish and Game released the winners of the 2019 Excellence in Service Award earlier this month. Up to five members of advisory committees across the state are given this award each year. This year, David Rak was one of the five

recipients for serving as secretary of the Wrangell Fish and Game Advisory Committee, according to the Department of Fish and Game, for "24 plus" years.

"I haven't gone back in my records to see how much 'plus' there is," Rak said with a laugh.

Rak joined the advisory committee because of an interest in how the rules and regulations surroundi...