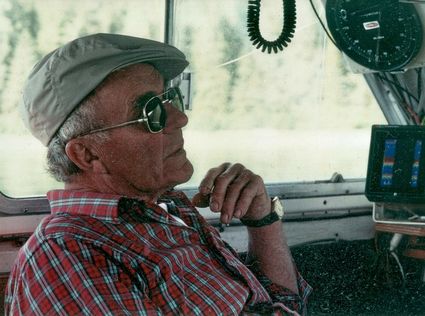 John grew up in Neenah, Wisconsin and earned a BS in geology at the University of Wisconsin. He enjoyed oil field survey work for Standard Oil but lost interest after being promoted to an office position. Back outdoors with the National Park Service in Yosemite was more appealing. Then around 1960 he came to the Northwest to visit his brother Bob who was opening a restaurant in Edmonds, WA. John was introduced to the commercial fishing scene in Anacortes through a fish supplier and was drawn to the waterfront. First working on a salmon tender, he later spent a winter running 75 crab pots by hand out of a skiff. In 1963 John leased the gillnetter Galilee and followed a friend up to Point Baker, Alaska for the salmon season. His first attempt at gillnetting was a success and he enjoyed this type of fishing immensely for the rest of his life. He made enough money to buy a little Bristol Bay sailing gillnetter that had been converted to power and named it the Fin after his father Finley Martin. John had finally found his calling. In the spring of 1966 while living on his boat at the PFI cannery in Petersburg he met Carolyn who was working in the Cold Storage office. She was recently divorced and raising 6 year old daughter Paige. They married later in 1966 and sons Bob and Dave where born in '67 and '69.

By now John had a new "Fin," a classic 36 foot Wahl, and was involved in many of the fisheries a small boat could do. Some include abalone diving, herring roe on kelp, trawling, halibut, herring gillnetting and just enough herring seining to qualify for a Sitka herring permit. During these years John was a solid father and husband while working tirelessly to wring a little more production out of the fishing opportunities he enjoyed. Money was surely a motivator but usually seemed secondary to the reward of applying his mental and physical talents to a successful effort. He often worked closely with a small group of similarly driven fishermen and derived much satisfaction from this camaraderie. In 1975 he bought the last "Fin", a new fiberglass gillnetter that served him well for 35 years. Still up for another adventure at 58, he partnered with Mike Piling to buy into Bristol Bay in 1984. That too went well and the fishery became John's main event until 2004, with a lot of help from his faithful crewman and friend Mike Bangs in later years.

There are so many good memories of John: Duck hunting. Smoking salmon. Thanksgiving deer hunts to Admiralty. Hawaii. Ice skating. Loud poker games. Cooking breakfast. Classical music. Birthday scavenger hunts always ending up next door in the cemetery. Working on nets at PFI. Summer picnics. Barbecuing salmon. Cookies in the PFI office. Fin Martin coming to visit every spring. Roller Blading in Petersburg and Seattle through his 70s. John's brother Dave coming up for the halibut derby and later for short IFQ trips and coffee every morning at the Moose. Playing cribbage with grandson Anthony at the kitchen table. Dove chocolates in his coat pocket for his granddaughters.

Dementia crept in and hit John hard by 2009. It was painful to watch his nine year decline. He received excellent care at Mountain View Manor and later at the Juneau Pioneer Home where they made the best of his condition. He is survived by his brother Dave in Wisconsin, wife Carolyn, daughter Paige, sons Bob (Becky) and Dave, and grandchildren Anthony, Helen, Lydia and Charlotte.