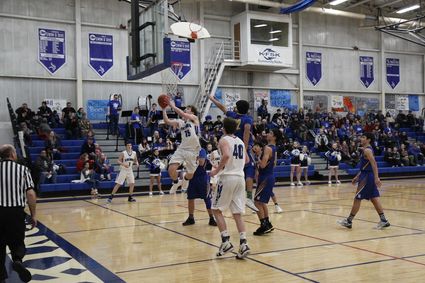 Louden Sandhofer attempts a shot against Metlakatla's efforts to block him.

Petersburg's boys basketball team lost two home games to Metlakatla over the weekend. They are ranked as one of the top teams in the state.

Friday's game began with good offense for both teams. The Vikings ended the first quarter 15-17. Then in the second quarter, the Vikings took a couple tough shots and threw the ball away, allowing Metlakata to stretch their lead.

"They're a team you can't make mistakes on," said Coach Richard Brock. "They convert your turnovers to points quickly. If you take a shot where the floor's not balanced or it's a long shot, they'll rebound and go."