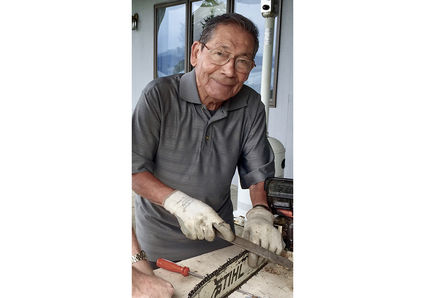 Joe Verulo Herrera, 90 went home to be with Jesus on January 15, 2019 peacefully, with all of his family by his side in Portland, Oregon. He was born in Apaseo El Alto, Guanajuato Mexico on February 21, 1928 to Antonio Herrera and Salustia Medina Herrera.

He was born the seventh of 15 children. Growing up in Apaseo till the age of 17, he came to the United States and worked his way up to Washington where he started his logging career working for the local logging companies. In the early 1950s he met the love of his life Roberta Davis while she was working as a waitress at the local lodge. They married in 1956 in Morton, Washington and soon started their family. They started their early years in Washington, first in Clearwater, then Lake Quinault, onto Neilton and later Hoquiam.

He became a US citizen during the presidency of President Eisenhower. In 1964 Joe and Bertie moved their family of six to Petersburg, Alaska to work for a local logging company, as he had become quite the equipment operator. After about four years and now a family of seven they decided to go back to Joe's roots and opened a photography studio in downtown Mexico City with his brother. In 1970, the now family of eight moved back to Petersburg and back to logging, and four years later became a family of nine.

In 1977, The Mill partnership was started with himself and his son-in-law as partners working together, until Joe and Bertie retired in 2000 moving back to Washington, and in 2014 on to Portland.

He loved the Lord Jesus with all his heart expressing this to his family till the last moment how important it is to have the love of God in our hearts, to serve and love Him diligently.

His parents, six brothers and one sister preceded him in death.

He will be laid to rest in Quinault, Washington.