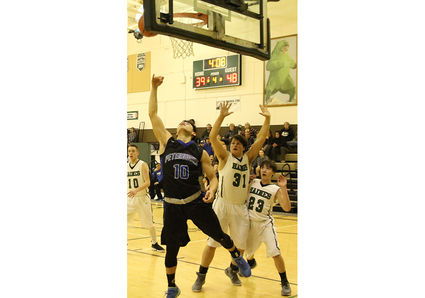 Vikings' Brennan Skeek attempts a shot in a game against Haines.

The Vikings lost their first basketball game of the weekend against Haines on Friday, but were able to win Saturday's game.

Friday's game saw a solid first half for the Vikings. Petersburg was down by two points at the end of the first quarter, but went into half time up by one point, 24-23. At the start of the third quarter, Haines went on a 10-point run with Petersburg unable to stop it or score. Although the Vikings played even for the rest of the game, they weren't able to lessen Haines' lead. In the fourth quarter Petersburg tried fouling Haines in an attempt to catch up in points, bu...