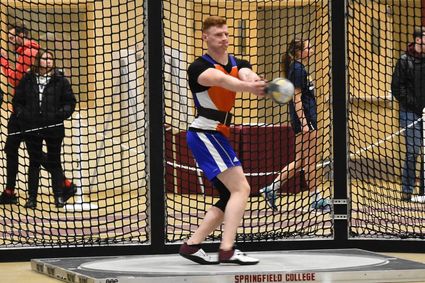 Ben Zarlengo competing at the Feb. 16 meet at Springfield College where he set the 35-pound weight throw record at 18.71 meters.

Ben Zarlengo broke a United States Coast Guard Academy record in the weight throw by a meter on Feb. 16 while competing in a meet at Springfield College in Massachusetts.

The previous record for the 35-pound weight throw was 17.7 meters, and Zarlengo beat that record at 18.71 meters, coming in first place in the meet.

"I showed up every day and worked hard I suppose," said Zarlengo. "It's a lot of hours. It's such a technical event. The smallest thing could ruin your throw. It's trying to get the muscle memory."

Zarlengo, 21, graduated from Petersburg High School in 2015 where he participat...