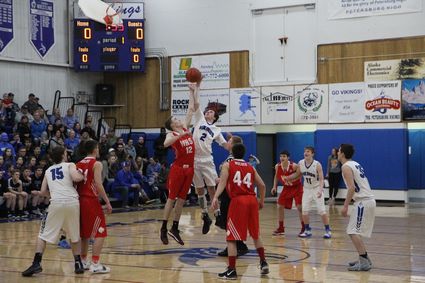 Julian Cumps secures the ball for the Vikings at the start of Saturday's game during the jump ball.

The boys varsity basketball team won their last two home games of the season against Wrangell before heading to Sitka to compete in the regional tournament.

"I thought the kids played with positive passion," said Coach Richard Brock. "Good two hard fought battles both nights, and good games to go into Regionals with. It was a good experience for the kids to see what level to play at Regionals."

During Friday's game, neither team seemed to take control of the ball. Every time the Vikings began to build momentum, the Wolves would make a big play. By the end of the fourth quarter, the Vikings...