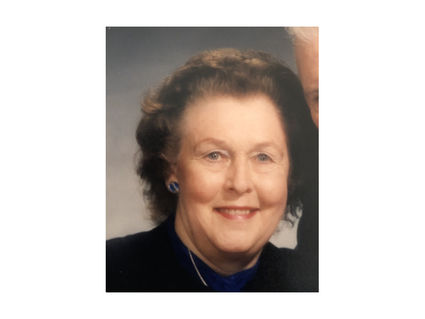 Carol Enge, an Iowa farm girl who left home in 1946 to teach school in the Alaska territory, married a son of one of Petersburg's pioneering families, and built a life devoted to home and community, passed away March 7 in Edmonds, Washington. She was 94.

Carol Winona Anderson was born in Riceville, Iowa, on July 31, 1924, to Lewis and Elizabeth Anderson, farmers who moved frequently as land and crop prices rose and fell. She graduated from high school at 16 and attended Simpson College in Indianola before landing a job teaching elementary grades in a consolidated school near her home. Restless to experience life outside Iowa, Carol traveled in 1945 for wartime work at Seattle's Boeing Aircraft plant. On her days off, she would stroll the waterfront and was captivated by the sight of ships steaming for Alaska.

Back in Iowa, Carol applied for teaching positions in the territory. The first reply she received was a telegram from Lester Wingard, principal of the Petersburg Schools, offering her a position for $2,400 a year. Compared to her Iowa salary, it seemed like a fortune. In August 1946, she traveled by rail, steamship and seaplane to Mitkof Island to start her new life.

Carol fell in love with Petersburg and, soon, with a handsome Naval officer. She was a 22-year-old 4th grade teacher when she met John Enge, who had skippered vessels in the English Channel and later the mid-Pacific. The two were introduced at a community dance at the Sons of Norway Hall, soon going steady, and married on Christmas Eve, 1946. Carol taught for a year before giving birth to their first son, Arnold, then retired from teaching to raise her family.

John, meanwhile, accepted a job buying fish for Pelican Cold Storage on wild Chichagof Island. Carol recalled arriving by float plane wearing a suit, hat, and heels and discovering a remote fishing outpost where brown bears roamed, a single boardwalk connected the homes, and an automatic washing machine became her most precious possession. The Enges soon had two more sons, John and Steve. Carol remembered the Pelican years as a time of stark challenges, but she took pride in making a home in the rugged, freewheeling community.

The family moved back to Petersburg in 1952, into the house on First Street that had been built by John's parents, Martin and Augusta, in 1929. The Enge home was at the center of a swirl of activity directed by Carol that involved Boy Scouts and Sunday School and gangs of neighborhood children who swarmed in and out on daily rounds, grabbing fresh cookies, feasting on Saturday morning Swedish pancakes, or summer treats like homebrewed root beer. When the summer sun shone, or winter snow was good, Carol could often be found at Blind Slough or the Old Ski Hill with a carful of kids. Two daughters, Marilee and Elisabeth, came along later, and the energy turned toward the girls' activities, still focused on Scouts, Church, and the outdoors.

Carol believed in providing a happy home, but she gave her children remarkable freedom to explore the Southeast Alaska wilderness, often to the dismay of other parents. Her sons roamed the waters around Petersburg in skiffs, fishing vessels, and handmade rafts, sometimes alarming the neighbors. One friend asked in later years if she hadn't been worried. "Well," replied Carol. "They grew up, didn't they?"

Carol served in countless volunteer positions, including teaching Sunday School and many other roles at Petersburg Lutheran Church; leading troops of Scouts at all levels; serving on the Petersburg Library Board; and on the Petersburg School Board. She was active in Eastern Star and Toastmistress Club.

As co-chairs of the Book Committee of the Pioneers of Alaska Igloo 26, the Enges led a years-long effort to collect histories from families living in Petersburg before Statehood and published them in a book, Pioneer Profiles: A History of Petersburg Settlers. In recognition of their work, Carol and John were honored with Petersburg's Norwegian American Award in 2005.

After John passed away in 2010, Carol was determined to stay in the home she and John loved so much on First Street, tending her garden and berry bushes, and treasuring visits from children, grandchildren, and friends. She persevered until 2017, when, at the age of 92, she moved to Washington to be closer to family.

Gifts in Carol's memory can be made to the Petersburg Public Library, Clausen Memorial Museum, and KFSK Radio. A memorial service and gathering will be held in Petersburg later this year. The family welcomes memories of Carol submitted to http://www.becksfuneralhome.com.