Vikings one basket short of qualifying for State 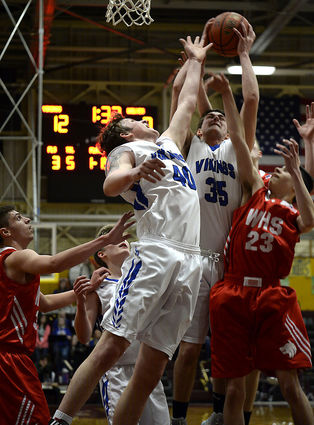 Juniors Gunnar Payne (40) and Rylan Wallace (35) rebound against Wrangell's junior Skyler Lofftus (23) during the Vikings 42-38 win over the Wolves.

In the final championship game against Metlakatla on Friday at the regional tournament in Sitka, the Petersburg Vikings lost by one point with a final score of 63-64.

Petersburg's first game of the tournament was against Wrangell. It was the Vikings' third game against the Wolves in five days, since the two teams had played each other the previous weekend.

"It's always difficult to play anybody that many times in a row, especially your rival," said Coach Richard Brock.

The game started out in Petersburg's favor with the first quarter ending 12-9. The Vikings lead continued into half time, b...