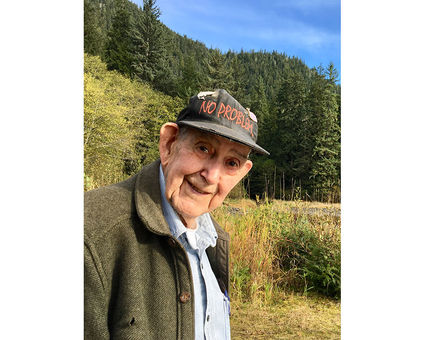 Thomas William Lewis, 97, passed away peacefully on March 2, 2019, in Petersburg, Alaska. Tom was born October 26, 1921 in Foster, Oregon, the son of Thomas Leroy Lewis and Bessie Olive Clark, and the oldest of four children. His two sisters, Myrtle and Irene, preceded him. His younger half- brother, Denny, lives in Sweet Home, Oregon.

He graduated from the 8th grade in Sweet Home and went to work in the logging industry. He had a cousin, Glenn, whom he used to hang out with that introduced him to his ever-ready pendulum. He believed in its helpfulness in matters of life up to the time of his death.

When WWII broke out in Pearl Harbor in December, 1941, he and 16 other Sweet Home youths joined the Navy in January, 1942. Tom is the last of those local heroes to pass. He volunteered for Patrol Torpedo boat duty and was stationed in Guadalcanal in the South Pacific. He served principally as a motor machinist on a 78' Higgins PT 268, but PT boat crews were trained to proficiently man each and every position on their boat. He mustered out in October, 1945. In 2014, he accompanied other Alaskan veterans on a sponsored Honor Flight to Washington, D.C. to visit the war memorials. These deserving veterans were honored for their service and Tom was humbled and proud of that recognition.

In 45 he returned to the logging industry and firefighting on the Oregon Coast. His marriage ended, and leaving his two children, Leroy and Sharon, he headed to Petersburg, Alaska in 1953 to pursue new logging opportunities. His son, Leroy passed in 1981 from cancer. His daughter, Sharon, lives in Bend, Oregon, and thoroughly enjoyed regular visits to Petersburg during the past 11 years.

He met Mildred Sandvik and they married in 1955. She had 3 sons, Bob, Steve & Ted, who now live in Alaska and Washington. Together, they had one son, Tommy. He passed in 2008. He also leaves behind 11 grandchildren and 12 (soon to be 13) great grandchildren.

When his health would not let him continue in logging, he began trapping, commercial fishing and panning for gold. In 1966, he started working for the Alaska Marine Highway system as an engineer and retired 20 years later in 1986.

He and Mildred then enjoyed traveling to California, Oregon and throughout Alaska, visiting his daughter, his sons and his grand & great grandchildren. They loved hunting, camping up in the interior, fishing for grayling and visiting longtime friends in the Tok area.

He collected a lot of diamond willow and enjoyed making coffee mug trees, carving names, fans and balls with chains out of solid pieces of wood, and could whittle flowers out of sticks. He continued this hobby until this past year when he got "trigger finger" and could no longer manipulate the carving knife. He would scout the area for blueberries and cranberries, which he loved to pick and add to his baking recipes. He has shared several of his favorite spots with friends in Petersburg.

In 2007, Mildred's health required she enter the local long-term care facility. Tom became a daily regular there, visiting Mildred and developing very strong feelings for the staff and the "inmates" as he lovingly called them. Even after Mildred passed in 2009, Tom continued to bake and deliver desserts every Monday until January of this year.

Tom's presence will be missed by many of the town residents. His stories were endless, his memory of events was appreciated by many, his humor and sayings will be remembered for years to come. When asked how he was feeling, he would reply, "better than a dead horse".

He affectionately referred to the wonderful physical therapists at the hospital as "the terrorists". He wondered why people would say "you're looking good, rather than saying "you're good looking"! He would sing his "ditty" songs learned in the Navy, and he was quite a dancer. Not only his humor, but his apple pies will truly be missed. When taking them to the Alaska Pioneers meetings, many would get a piece of pie with their meal fearing there wouldn't be any left at dessert time. His kelp relish was the secret ingredient in his delicious potato salad.

His stamina was amazing. He would be invited out to dinner and he would more than likely be one of the last people to leave; he never tired of chatting and sharing stories with the guests.

Tom Lewis, with his cap cocked on his head, with his red suspenders and his diamond willow cane, was a Tough Old Bird, as Old Doc Smith wrote on his chart one time. He will be sorely missed by his many close friends and by his loving daughter and his family. But he will always be with us, just lacking his hugs, his memory will live on.

And if you listen, you might continue hearing him say, "No Problem", in his quiet easy manner.

Please join us May 11th, 2019 from noon on at the "New" Beachcomber to help us celebrate his life and to share your stories and memories of Tom Lewis.