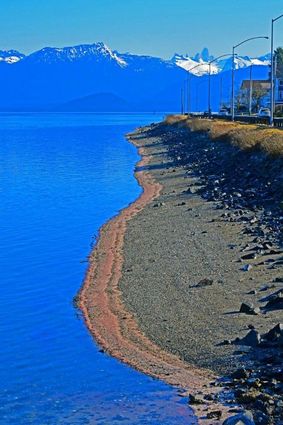 A thick swath of krill washed ashore along the North Nordic Drive beach on Sunday. NOAA oceanographers theorize they may have been pushed ashore while mating near the surface and were caught in the tide. Once the tiny shrimp-like animal is caught in the surf or tide that is the end of them. Another theory is that low oxygen conditions, known as hypoxia, are a less likely explanation because the condition doesn't occur until later in the summer. The mass strandings are unusual, but not unheard of. Krill is a cornerstone of the ocean food web and are consumed by salmon, rockfish, lingcod and...