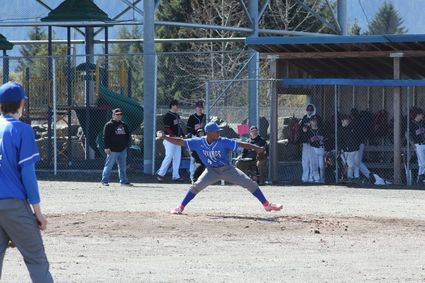 Sawyer Bryner pitches during the third inning of the Vikings' first game against Juneau-Douglas High School on Saturday.

Car horns could be heard among the cheering of the fans as the Petersburg High School varsity baseball team played Juneau-Douglas High School at home over the weekend, but the encouragement from the stands and the parking lot was not enough to help the varsity team secure a win.

The Vikings gave JDHS an early lead during Friday's game. Petersburg was down 1-5 by the end of the first inning. JDHS went on to make run after run through the sixth inning. Although the Vikings struggled throughout the game, Head Coach Jim Engell said that the team was able to play all seven innings, which is som...