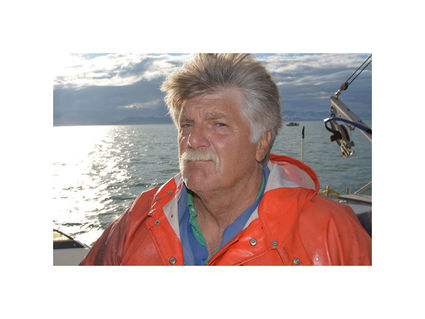 He was born on September 1, 1951 to June and Gordon Vick, in Petersburg, Alaska, the only child for his first 11 years until brother Jimmy came along. Dan loved playing on the beach in front of gramma Rikka's house with his cousins and friends. He grew up in that neighborhood

with all of his cousins, friends and huge fishing family.

Dan's senior year of high school, his draft number for the Vietnam war was #50. He knew he was going, so a few days after graduation, he enlisted into the Navy. He went to boot camp in San Diego, California. He became a signalman aboard the USS Conquest MSO 488, and was stationed in Pearl Harbor, Hawaii. After six months there, the USS Conquest and crew headed for Guam, the Philippines, and Vietnam. People treated Vietnam Vets poorly back then. He didn't care, Dan was

very patriotic until his dying day.

After returning home in September of 1974, he went to work for Petersburg Fisheries on the F/V Howkan with his dad. His dad took a job as skipper on the F/V Mitkof, and Dan became the skipper of the Howkan.

In 1975, he married Theresa Hasbrouck and continued to run the F/V Howkan. Daughter, Heather Lee arrived in 1978, Stewart in 1979, and Dan Jr. (Royce) in the spring of 1981. In 1985 Dan bought the F/V Frigidland. His kids were raised on that boat. Every summer for 10 years they bought fish out of Lynn Canal.

In 1995 when the kids were all in high school, Dan sold the F/V Frigidland, as he was building the F/V Heather Lee, his dream gillnetter. He was very proud of his boat, and it showed. he was constantly spit shining something, and his engine room was the cleanest one in the fleet.

In October of 2018, he retired and sold the F/V Heather Lee to son Stewart.

He was preceded in death by his father.

A Celebration of Life will be held May 25 at 2:00 p.m. at the Bojer Wikan Fisherman's Memorial at the Sons of Norway Hall with a reception to follow at the Moose Lodge.