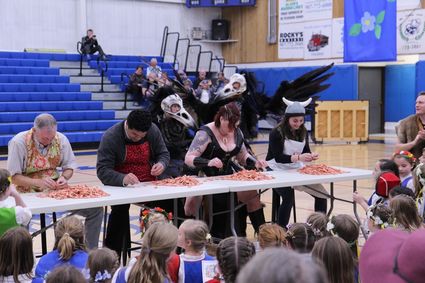 From left to right: Brad Connell, Elder Laumau, Valkyrie Lynette Odegaard and Casey Hosteler compete in a shrimp picking contest during the Little Norway Festival Pageant. The contestants had an undisclosed amount of time to peel as many shrimp as possible. Odegaard and Hosteler tied for first place with 1.75 ounces of peeled shrimp. Meanwhile, Odin's ravens Huginn (Sheena Canton) and Muninn (Orin Pierson) were circling the contestants trying to distract them. The two ravens sit on either side of Odin's throne in Valhalla and represent thought and memory. Since Odin only has one eye, Huginn...