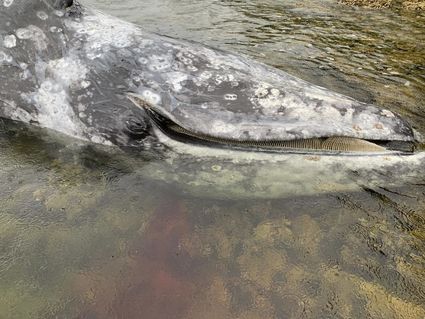 According to NOAA spokesperson Julie Speegle, NOAA is currently making efforts to secure the carcass of a gray whale to the beach where it washed up on Wrangell Island a few days ago, and plan to perform a necropsy later in the week.

WRANGELL - The carcass of a gray whale was reported floating between Wrangell and Channel Island, in the eastern passage. According to Kate Savage, with the National Oceanic and Atmospheric Administration, her organization heard about the whale early Saturday morning, June 15. Wrangell resident Sara Gadd shared several photographs of the animal on Facebook. Gadd's husband, Charles, took the photos. He said that he first found the whale floating in the water around 3:30 p.m. on Sunday, and saw it again beached around 9:30 a.m. Monday, June 17. It is located about a mile or two before Earl We...