A whale of a tale: 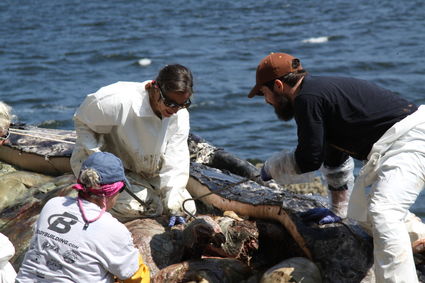 A trio works to get a sample from the stomach of a gray whale, which washed up onto a beach on Wrangell Island early last week. (Right to left) Greg Roberts, Tory Houser, and Kate Savage.

Last Thursday, June 20, members of the National Oceanic Atmospheric Administration, the Forest Service, the Alaska Department of Fish and Game, the U.S. Fish and Wildlife Service, and local volunteers all converged on the beach of east Wrangell, near Channel Island, to dissect a dead gray whale that had washed ashore.

Kate Savage, once a veterinarian in Wrangell but now working with NOAA, said that an Unusual Mortality Event is occurring all along the Pacific Coast, from Alaska to Mexico. There have been over 150 dead whales reported this year, according to a report by NOAA. Savage said th...