DEC: Sewage discharge "not likely" from the Le Soléal 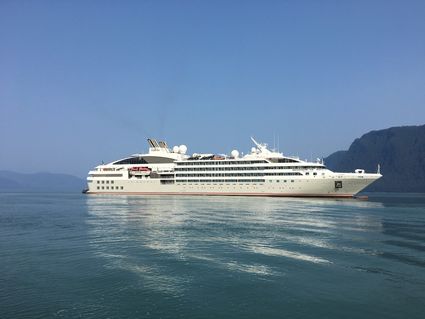 The cruise ship Le Soleal at anchor outside LeConte Bay on the morning of July 10.

An investigation by the Alaska Department of Environmental Conservation revealed that the Le Soléal did not dump sewage into Frederick Sound near Le Conte Bay earlier this month after a report of "long brown sludge" seen near the cruise ship's anchorage.

The DEC conducted an onboard inspection, reviewed the electronic monitoring records for the ship's pumps, observed samples taken of the ship's treated water and talked to crew members of the Le Soléal, said Ed White of the commercial passenger vessel environmental compliance program with the DEC. Additionally, the Le Soléal is operating under a state wastewater general permit, which allows for the discharge of treated wastewater in state waters. The wastewater must meet strict permit limits for bacteria and must be regularly sampled, said White. The ship must also secure all wastewater discharges when near shore and when stationary.

"Based on the information we have received, the DEC has concluded that it is not likely that the substance that was in the water was discharged from the Le Soléal," said White in an email.

The DEC first received a complaint last week of sewage being seen near the Le Soléal's anchorage that was 200 yards in width and about a mile long in Frederick Sound near Le Conte Bay on July 10. Captain Erwan Le Rouzic, of the Le Soléal, said last week that any sewage found in Frederick Sound could not be from the cruise ship since he and his crew follow the "most stringent rules in Alaska waters."

Some residents said that sewage discharged was seen in the Petersburg harbor, but White said he did not receive any complaints of sewage in the harbor.