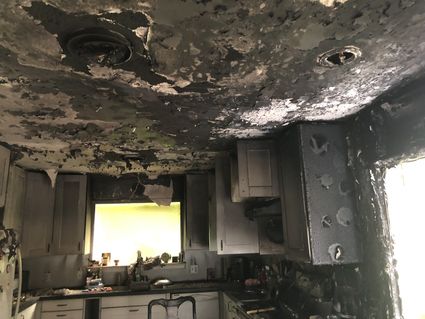 A fire caused smoke and heat damage to the ceiling and cabinets in the kitchen of a home on Wrangell Ave. on Tuesday.

The Petersburg Fire Department responded to a house fire on the 800 block of Wrangell Ave. on Tuesday that was quickly extinguished thanks to the quick thinking of a neighbor who happened to be passing by.

Sergeant Derek Thorsen, of the Petersburg Police Department, was walking down Wrangell Ave. around 10 A.M. on Tuesday while off duty when he saw smoke coming out of the kitchen window of the home. He called 911 and went to investigate the source of the smoke. He saw flames coming out of the window and grabbed a garden hose and began spraying water into the window. Assistant Fire Chief Da...