Bear safety workshop covers the importance of respect for bears 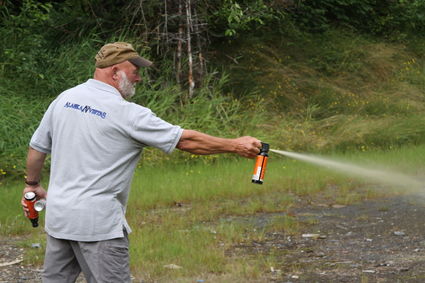 Robert Johnson demonstrates how to use bear spray during last Wednesday's bear safety training at the gun range.

WRANGELL - A bear safety workshop was held at the gun range on Spur Road last Wednesday, July 24, as one of the first events scheduled for Wrangell's annual Bearfest. Wrangell resident Robert Johnson led the workshop. He has had a lot of experiences with bears over the years, he said, and told everyone early in the workshop that having respect for bears was an important part of staying safe around them.

"You just have to be in awe of these animals and show them the utmost respect," he said. "As long as you treat them with respect, and they've been treated with respect all their lives then t...