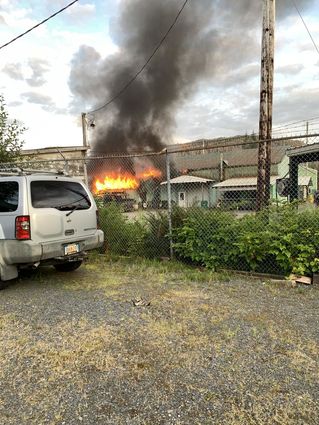 Flames could be seen coming from the roof of the tire shed at the Public Words compound Monday evening.

A call was placed to the Petersburg Fire Department at 7:40 P.M. Monday night after residents reported seeing dark, black smoke coming from the Public Works Department lot on 2nd St.

Flames were coming from a shed that was filled with large, spare tires for the borough's vehicles. Nearby residents stated they also heard loud popping noises. The fire was contained by about 8 P.M., but firefighters didn't leave until around 9:30 P.M, said Assistant Fire Chief Dave Berg. The cause of the fire is still being investigated.

"We were unsure of what was in that room because of the smoke," said Be...