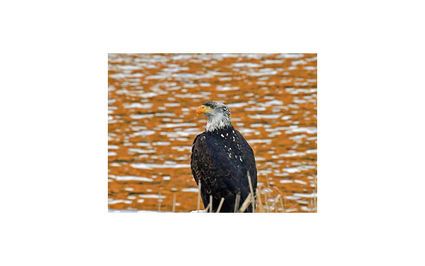 A bald eagle's white crown was dirtied by its foraging efforts.

Mark Roberts was on the second hole of the Sea Mountain Golf Course in Sitka last month, and the only one on the green, when the golf ball he just swung at hit a bald eagle while it was flying about 10 yards in front of him. The eagle was still alive as Roberts approached it, but it died while he was on the phone with a 911 dispatcher.

"I could not believe what just happened," said Roberts. "Did I panic? Did I cry? Did I get shook up? Yes, I did. Very much so."

Roberts said the 911 dispatcher was professional and helped him relax. She contacted the Alaska Raptor Center, who later responded...