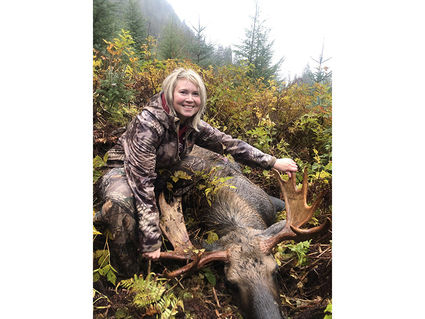 Haili Lachapelle proudly poses with the moose she shot this season on Kupreanof Island Monday afternoon.

The 2019 moose season ended with a preliminary count of 125 animals, setting a new record in unit three.

Moose season began on Sept. 15 and ended Tuesday, Oct. 15. As of Wednesday afternoon, the final number of moose brought in by hunters this season was 125. Hunters have until five days after the end of the season to report their kill to fish and game officials.

"It's still subject to change," said Fish and Game Area Biologist Frank Robbins. "I don't expect it to change a lot."

In 2017, hunters set a unit record of 119 moose harvested in the season. That number was beat by six moose as of...