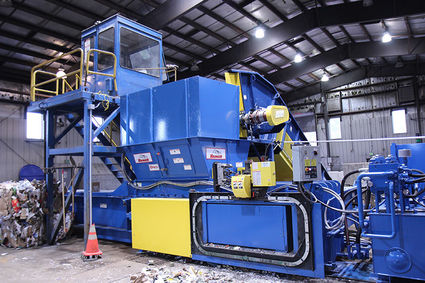 Material is loaded into the baler's hopper, in the center of the photo, and is dropped down into the charge box and compacted. On the left is the operator's cab where the control console is located and on the right is the hydraulic power unit.

Installation of the borough's new baler has been completed, and it should be baling garbage sometime this week, according to Public Works Director Chris Cotta.

Demolition of the old baler began at the end of September and through the first week of October then the site was prepared for the new baler. Installation of the baler began on Oct. 7 and has been completed, except for some welding that needs to be done, according to Cotta. The new baler will operate much like the old one, but Cotta said the updated technology may cause changes to how garbage and recyclables were baled in the past.