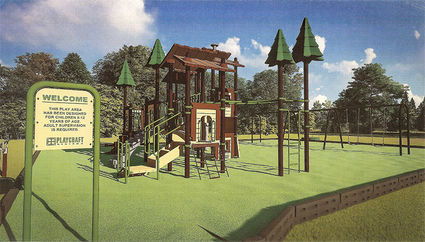 The new Sandy Beach playground was designed to fit into the Southeast Alaska environment. It will be covered in a brown and green paint and topped with fake pine trees. The Petersburg Indian Associated may also incorporate native art into the playground to preserve the native history of Sandy Beach, according to Glo Wollen, one of the project organizers.

The Petersburg Rotary Club is leading fundraising efforts to replace the playground at Sandy Beach Park with a larger, more modern playground that would appeal to children of all ages.

The goal is to raise about half of the money for the playground, and then apply for grants to cover the rest of the costs, said Glo Wollen, one of three women who are spearheading the fundraising. The project has an estimated cost of about $120,000 and so far, they have raised $28,200 in less than two months.

The idea of a new playground at Sandy Beach was tossed around a few years ago by the Petersburg Rot...