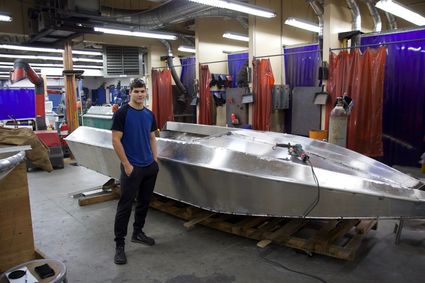 Kole Sperl stands next to his 16-foot skiff that he has spent the last two months building from scratch.

In a couple of months, Petersburg High School senior Kole Sperl has turned a pile of aluminum sheets into a skiff. He has plenty of work left to do before it's seaworthy but Sperl said in its current state, it would float.

"There might be a couple leaks that I'd have to patch, but it'll definitely float," said Sperl. "All the main welding is done down by the water line."

Sperl spends anywhere from one and a half hours to three hours a week working on his skiff as part of his marine fabrication and independent study class. He grew up around skiffs, and Sperl said he wanted to build his own t...