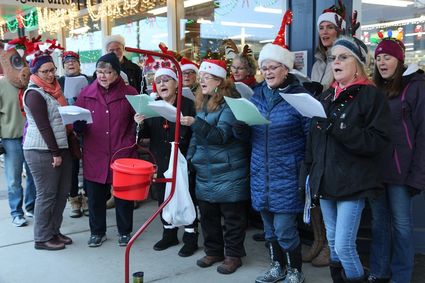 The Luncheonettes became the Twisted Antlers on Saturday while caroling outside of Hammer & Wikan Hardware to raise money for the Salvation Army. Typically, there are about seven or eight members of the Twisted Antlers, but this year other members of the community joined the group to be a part of Cindy Marden's last performance. Marden, front row on the right, will be moving out of state in the spring. Back row from left to right: Mel Stockton, Susan Holmes, Darold Kludt, Carolyn Hurtt, Mary Ellen Anderson, Erica Kludt-Painter and Rachel Etcher. Front row from left to right: Eliza Warmack, Lila Trask, Mary Leonard, Nicole McMurren, Irene Littleton and Marden.