Hydro project under construction near Kake 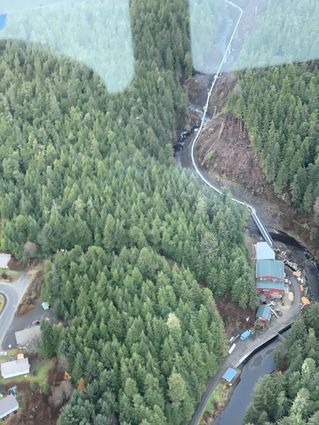 An aerial view of the Gunnuk Creek Hydro Electric Project showing the penstock. Construction on the penstock was completed this past summer.

Inside Passage Electric Cooperative is building a hydro electric project that will utilize Gunnuk Creek and supply Kake with 55 percent of its annual energy usage.

The Gunnuk Creek Hydro Electric Project has an installed capacity of 500 kW, according to Service Operations Manager Brandon Shaw. It's estimated to produce 1,600 MWhs annually, which is around 55 percent of Kake's energy usage. Over the course of 50 years, the hydro project will save approximately 6.2 million gallons of diesel fuel. Shaw said the hydro project will operate as a "run of river" hydro project, capable of carrying t...