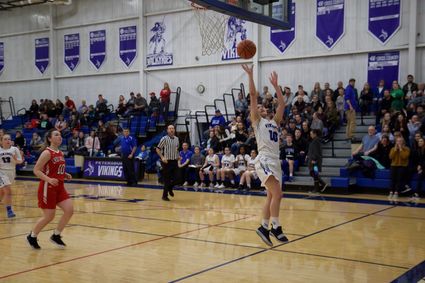 After running up court with little resistance from the Lady Wolves, Kaili Simbahon attempts a shot.

The girls varsity basketball team had a rough start to the season this weekend, losing both their games to Wrangell.

The Lady Vikings gave the Lady Wolves a 17-point led early on in their first game of the season. Petersburg was able to close the gap to 10 points by halftime, but was unable to catch up to Wrangell. The Lady Vikings ended up losing the game, 37-57.

Head Coach Dino Brock said the team missed some crucial shots and had some early season mistakes, but the girls still put up a fight against such a large, experienced team like Wrangell.