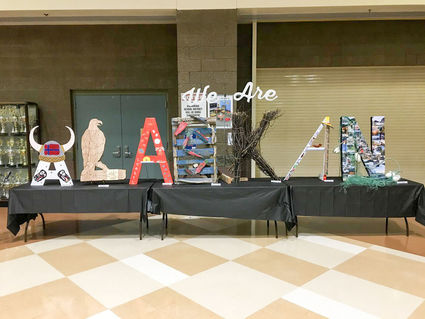 An art display made by the competing teams of this year's Rally the Regions Hardwood Classic. Each letter of the word "Alaskan" was decorated by one of the competing communities. Each letter, left to right, was made by Petersburg, Cordova, Chevak, Tanalian, Unalakleet, Unalaska, and Wrangell.

While the Petersburg Vikings came home with a championship last week, after the Rally the Regions Hardwood Classic, it was a less successful tournament for the Lady Vikings. The girls basketball team did not have any wins during the rally. However, according to Lady Vikings Coach Dino Brock, the tournament gave the team many chances to grow their skills on the court. The competition let the team show their strengths, he said, as well as areas for future improvement.

"We went up against some of the best 2A teams in the state," Brock said. "I thought that we played really well in all the game...