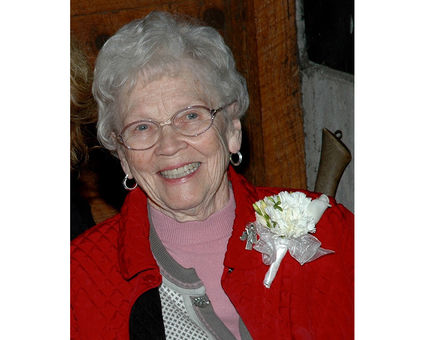 Born Constance Lorraine Rude in Minneapolis, MN on January 24, 1923, Lorraine Thompson was the daughter of J.O. and Amy Brekke Rude. She died peacefully at Mountain View Manor in Petersburg, Alaska on January 6, 2020.

After earning his degree, Doc Rude moved his young family to Ketchikan to practice

medicine, however, when his Norwegian language skills were discovered he was asked to move to Petersburg in 1928 and did.

Doc Rude and Amy took their four kids on many adventures aboard their Chriscraft,

driving as far away as Telegraph Creek, and Lorraine developed a deep appreciation for all that nature had to offer. After a childhood spent exploring the forests and waterways surrounding her Petersburg home, she returned to Minnesota to earn her biology degree at St. Olaf College. After graduation she came home to Petersburg to teach during the war years.

At the end of World War II Lorraine's childhood sweetheart, Tommy Thompson, returned from serving in the Aleutians and the two were married on September 10, 1945. Five years later Harold was born and Lorraine dedicated herself to motherhood. She went on to have Mark, Amy Jo, Grechen and Thomas. Lorraine was the consummate mother, a member of the PTA, and always up for a picnic, an outing to ice skate, hike or pick berries.

Raised in the Lutheran Church, Lorraine continued to be a very active member of both the Petersburg and Sitka Lutheran Churches. She enjoyed teaching Sunday school and

singing in the choir, baked countless pies and oversaw many a youth group activity.

Her husband Tom was busy working at Petersburg Cold Storage and later PFI, so during the summer months Lorraine packed provisions into backpacks, put the kids in waders and headed out for weeks at a time to their small cabin on the south side of Blind Slough. Her niece Kay Cisney (Bennett) spent many summers helping her beloved Aunt

Lorraine to care for her younger cousins. Lolo passed her love of the natural world on to her children and never lost the thrill of seeing a beautiful sunset, a soaring eagle, birds and flowers, rocks and shells.

In 1981 Tom and Lorraine moved to Sitka to run Sitka Sound Seafoods as a family business. Lorraine manned the front desk with clippers at the ready for fishermen who needed a haircut. It was a wonderful era full of hard work and lots of fun making the fleet feel a part of the family.

After retiring, they enjoyed traveling with friends and family. Tom passed away preparing his boat for an outing in November of 1997 and Lorraine stayed on in Sitka surrounded by family until her move back to Petersburg to The Mountain View Manor in October 2011, where sons Tommy and Harold visited her every day.

Lorraine was treasured all of her life for her strength, her open heart, her quick wit, and her genuine kindness. She will be missed.

A memorial service will be held later in the spring.