Vikings get their payback against the Chiefs 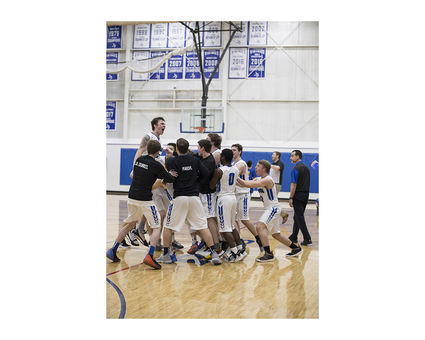 The Vikings rush the court to celebrate the buzzer beater dropped in by senior Gunnar Payne.  The Vikings beat the Chiefs 50-48 on Saturday and have their next home games Feb. 28 and 29.

In two hard fought battles over the weekend, the

Vikings came out victorious against the Metlakatla Chiefs, the only team this season to beat them.

"I think it was important to get a couple of wins under our belt against them going into Regionals," said Head Coach Rick Brock.

The atmosphere in the gym during Friday's home game had a tournament like atmosphere, said Brock. Both teams struggled to obtain and maintain a lead in the first half of the game. The Vikings were up at the end of the first quarter, 13-12. At the end of the second quarter Thomas Durkin scored a basket right before th...