Vikings win in overtime game against the Wolves 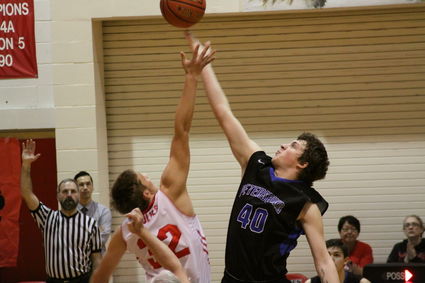 Gunnar Payne, right, reaches for the ball just ahead of Sean Gillen during tipoff in Friday's game.

There were just a few seconds left on the clock in Friday's overtime basketball game between the Vikings and the Wrangell Wolves, and the score was tied, 61-61. Just before the buzzer sounded at the end of the fifth period of the game, Thomas Durkin made a tough baseline jump shot that put the Vikings ahead, 63-61, and won them the game.

"Wrangell shot the ball well for that whole game," said Head Coach Richard Brock. "I kind of knew that going into the game. It's homecoming and records don't mean anything."