A double win for Lady Vikings against Haines 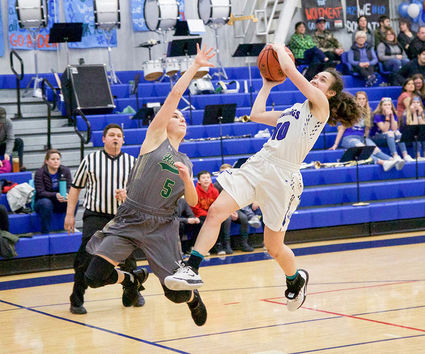 Kaili Simbahon intercepted the ball in Friday's game and ran upcourt to make a basket, while Haley Boron tried to stop her.

The Lady Vikings won both their games against Haines with at least a 30-point lead. They were their last two games of the season before Regionals.

From the second the first game started last Thursday, the Lady Vikings had a strong offense, said Head Coach Dino Brock. They scored 16 points in the first quarter, while holding the Lady Glacier Bears to five points. The Lady Vikings scored double-digits again in the second quarter, and only allowed Haines to score one point.

"We did a real nice job getting ourselves into an offensive flow," said Brock.

Petersburg kept their offense and defense...