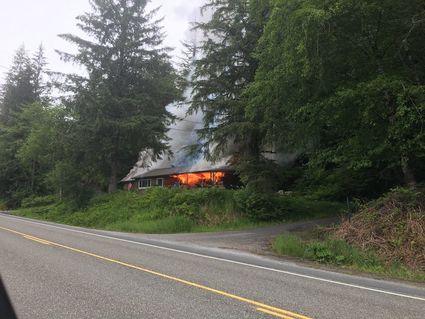 Flames burst out of the front door of a trailer house early Saturday morning.

The Petersburg Volunteer Fire Department responded to a trailer fire at the 5.3 mile mark of Mitkof Highway just before 8 A.M. on Saturday.

Assistant Fire Chief Dave Berg said as of Monday afternoon, the cause of the fire was still under investigation, but the fire started in the ceiling directly above the bathroom. By the time the fire department had responded to the scene, the fire had made its way out of the bathroom, through the house and out the front door. Berg said there was also thick smoke billowing out from the edges of the roof of the trailer.