Peratrovich mural to be unveiled 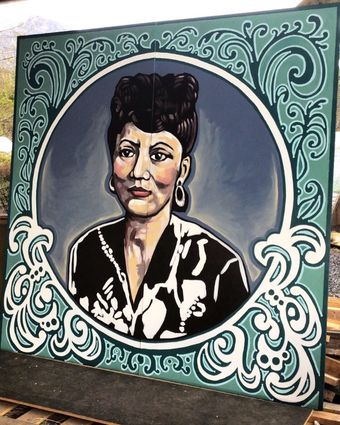 The completed mural of Elizabeth Peratrovich will be unveiled in front of the Petersburg Courthouse at 10 A.M. on Saturday.

The Petersburg Arts Council and Petersburg Indian Association will be unveiling a mural of Elizabeth Peratrovich on Saturday at 10 A.M. that will hang in front of the Petersburg Courthouse.

The unveiling of the mural will coincide with Peratrovich's birthday on July 4 and the release of her 2020 Native American $1 coin.

Plans for a mural of Peratrovich first began to form about two years ago when news broke that she would be appearing on a U.S. coin. At the time, Malena Marvin, of the Petersburg Arts Council, and PIA Administrator Tracy Welch were talking about the lack of native represent...