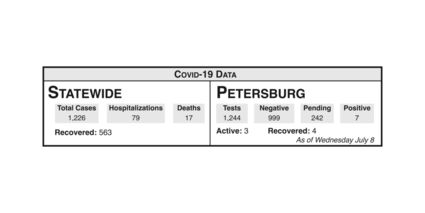 Two additional cases of COVID-19 were confirmed in the community in the past week, bringing the total number of cases to seven, though four have recovered.

The first was identified on July 2. The individual had developed symptoms and was evaluated by Petersburg Medical Center and tested on site, according to a joint press release between the Petersburg Borough and PMC. The person was directed to isolated at home.

The second confirmed case of COVID-19 was identified as part of OBI Seafoods' quarantine and testing program on July 4, according to a joint statement between the borough and PMC...