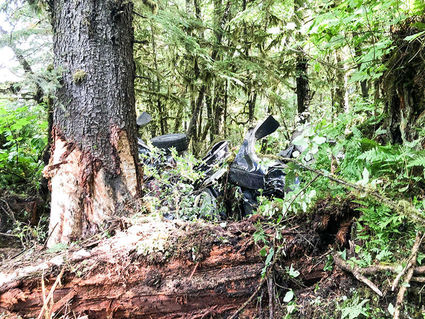 The black SUV lies on its side where it came to a halt after driving off the road and killing all four passengers inside.

At about 10:18 A.M. on Tuesday, Alaska State Troopers received a request for a welfare check on four people who were last known to be headed south on Mitkof Island towards the Blind Slough area on Monday, according to the ADPS release. While responding, troopers were informed of a vehicle wreck near the 27 mile mark of Mitkof Highway. Alaska Wildlife Troopers arrived on the scene of the wreck and determined all four occupants of the vehicle were deceased, according to the press release. The individuals were also the subjects of the welfare check.

Troopers from Juneau have been deployed to assist with the investigation.

Petersburg Volunteer Fire Department Assistant Fire Chief Dave Berg said the vehicle likely rolled over at least once and spun around a tree before coming to a halt on its side. Firefighters had to cut off the top of the vehicle and some seats to remove the bodies, said Berg. A spreader also had to be used to pry the dashboard from up against the front seats.

“It’s taxing when you’re working on a car trying to get somebody loose, and they’re trapped, and they’re deceased, and there’s nothing you can do about it other than to work towards getting them out,” said Berg.