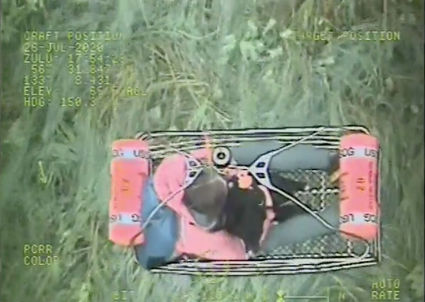 One of the rescued individuals gets airlifted out of Kah Sheets Bay on Sunday along with one of the dogs.

The United States Coast Guard transported two people, and two dogs, to Petersburg after their skiff became stuck underneath an overhanding tree in Kah Sheets Bay on Sunday, according to a USCG press release.

Coast Guard Sector Juneau received a report from a Good Samaritan of a man overboard in Kah Sheets Bay, according to the press release. The owner of the skiff had fallen into the water when the vessel became wedged underneath an overhanging tree, according to the press release. The man overboard was able to get back into the skiff, but the individuals were transported out of the area du...