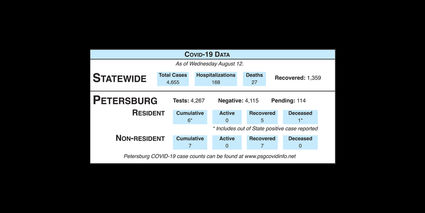 A traveler tested positive for COVID-19 on Aug. 4 after previously testing negative for the virus, according to a press release from the Petersburg Operations Center.

The traveler arrived in town at the Petersburg Airport on July 20, but tested negative upon their arrival, according to the release. A test that was taken on Aug. 4, the day the individual left town, recently returned positive for the virus. According to the press release, the person is no longer in Petersburg and is considered recovered by the state.

The state has released further guidelines for the changes made to state hea...