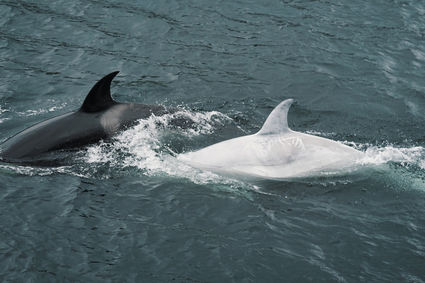 A rare, white killer whale was seen near Kake on Thursday, Aug. 6. Click on a photo to watch a video on Youtube posted by KING 5 News (NBC Seattle)

Passengers onboard Dennis Rogers' charter boat, Northern Song, were treated to a rare surprise last Thursday, Aug. 6, when they witnessed a white killer whale hunting with two other orcas near Kake.

"Everyone was ecstatic," said Rogers. "It's always a treat to come across killer whales, and then to have a white killer whale, which is super rare, was an extra treat."

Rogers said he looked up the whale in a killer whale catalog produced by the Department of Fisheries and Oceans Canada and learned the all-white orca is a two-year-old male named Tl'ut. His identification number is T046 B1B. Tl'...