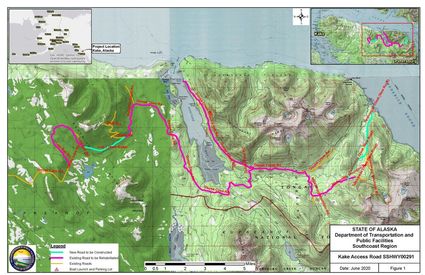 Photo courtesy of the Alaska Department of Transportation and Public Facilities

This map shows the route the Kake Access Road project will take and where the new stretches of road will be constructed.

Construction on the Kake Access Road project was expected to start in early to mid-July, but Joseph Kemp, Alaska Department of Transportation engineering manager for the project, said one last permit is needed before stretches of new road can be built.

Permits from the Alaska Department of Fish and Game, United States Forest Service and the United States Army Corps of Engineers are needed in order to undergo the project. Kemp said he is waiting for a permit from the USACE to be authorized, which has caused DOT's contractors, Kiewit Infrastructure West, to start one month later; however, ot...