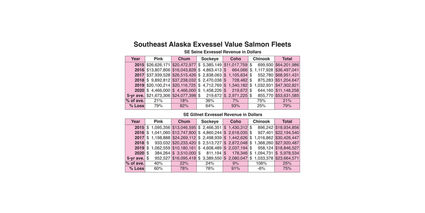 This year's Southeast Alaska seine and gillnet exvessel revenue is down from the 2019 revenue and 5-year average as pictured in graph above.

This year's pink salmon harvest came in at around 7 million, which is considerably down from the 35 million ten year average. Troy Thynes, regional management coordinator for commercial fisheries with the Alaska Department of Fish and Game, said the pink salmon run in Southeast Alaska hasn't been this low since 1976.

There are several causes for this year's poor salmon run. In 2018, the parent year for this year's pink salmon, escapement was poor in Northern Southeast Alaska, said Thynes. In other places across the region escapement goals were met, but the fish were returning to spawn durin...