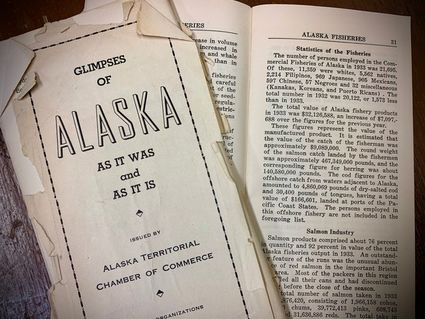 This brochure describes Alaska life and industry in 1935, noting "the poor man has more independence in the north and. . .chances for advancement are much better". An unorganized territory until 1867, Congress established Sitka as Alaska's seat of government in 1884, and made the laws of Oregon applicable to Alaska. In time the capital was moved to Juneau, and laws were instituted to allow incorporation of towns. Petersburg was the eleventh to do so. By 1935, Petersburg was considered an "industrial center" with 1,500 people, a school, two bakeries, four meat mar...