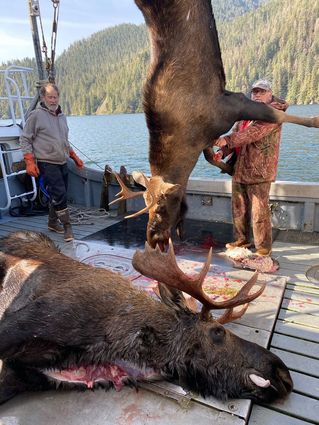 Petersburg hunters Adam and Rob Swanson each took a moose on Sept. 17 on the mainland north of Petersburg. Rob, right, stands next to his son's moose, while the moose he shot lies in the foreground. Mike Pilling, left, assisted with the quartering. Adam estimated his moose weighed 700 pounds, and his dad's moose weighed about 900 pounds.

Moose season came to a close on Oct. 15. Final harvest numbers came in on Oct. 20, according to Hilary Wood with the ADF&G Petersburg office. The communities of Wrangell and Petersburg are located within Hunt RM038. This is an area that stretches from Coronation Island in the west, to the mainland in the east, and from Meyers Chuck in the south up to Point Hobart in the north. This season saw 115 moose harvested in total. There were two bagged on Wrangell Island, and nine on Mitkof Island. Only one moose on Mitkof island was an illegal kill. The most moose this season were killed on Kuiu Is...