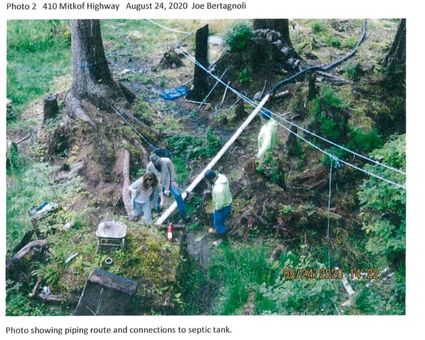 The photo above shows what borough officials say is the above ground pipe route with connections to the septic tank.

The Petersburg Borough Assembly heard an appeal for an order of abatement at 410 Mitkof Highway, before their regular meeting on Tuesday, and upheld the order that was issued on Aug. 3 to Courtney Johnson for a raw sewage leak.

The borough first became aware of the sewage discharge coming from Johnson's residence on July 24 when officers from the Petersburg Police Department arrived at 410 Mitkof Highway in search of an individual with a felony warrant, according to Utility Director Karl Hagerman. Johnson gave permission to the officers to search her home for the individual, said Hagerman...