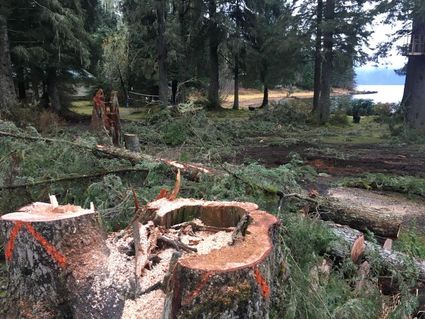 A recently cut tree at Sandy Beach reveals a hollowed out, rotten trunk.

The Petersburg Borough Assembly approved the Petersburg Rotary Club's request to begin construction on their Sandy Beach playground project at their meeting on Monday.

As part of the project, trees will be removed and trimmed to make room for the new playground equipment. Contractors had begun cutting down trees several weeks ago in preparation for the construction, but the tree cutting came to a halt when Borough Manager Steve Giesbrecht became aware of some concerns from the community. In an email to the assembly, Giesbrecht said the contractors had been instructed to start cutting trees...