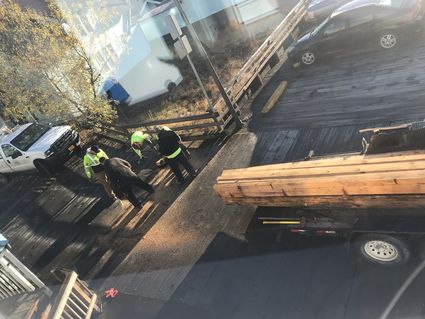 Public Works staff replace deteriorating planks in the Sing Lee Alley Bridge Tuesday morning. Public Works Director Chris Cotta said ten planks were replaced that day and several more planks are likely to be swapped out in the coming weeks. Cotta said he will be including a budget item in the fiscal year 2022 budget for the replacement of the bridge deck, which includes about 400 planks. He estimates the project will cost about $100,000. The untreated planks that were used in the deck are expected to last six to eight years, said Cotta. The bridge deck, along with upper parts of the bridge, were last replaced in 2014.