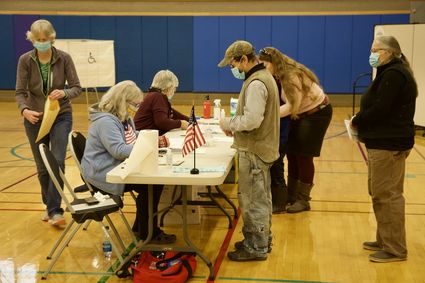 Election workers help residents sign in and receive their ballot.

The Petersburg Borough, including the city of Kupreanof, saw a 23.88 percent voter turnout on Election Day earlier this month, with 707 of the 2,961 registered voters casting a vote in person on Nov. 3, according to unofficial results from the Alaska Division of Elections.

According to Sally Dwyer, a local resident who handled early voting for the state, over 650 residents cast in person absentee ballots prior to Election Day. In a press release from the Alaska Division of Elections on Nov. 9, absentee ballot counting began on Tuesday. Count updates will roll out releases twice a day until...